This article was written by Phin Upham

There aren’t many artists belonging to the neo-soul movement who had records in the prime of the 70s, but Lee Fields is one of them. He got his start in 1979 with a release called Let’s Talk it Over. Though he played shows during that time, he had a hard time getting the release off the ground. He would often sell it from his car after shows. 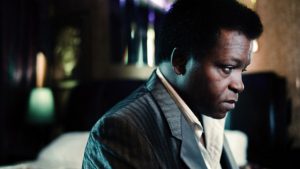 When the neo-soul revival came around in the early 2000s, Fields was ready.

Lee had already had experience touring with some prolific bands. He played under Kool and the Gang, Sammy Gordon and the Hip Huggers. He found Truth and Soul in the early 2000s, where he hooked up with the house band “The Expressions.” Fields hit the tour scene hard, already having had 43 years of experience as a set-piece musician.

Fields is often compared to the Godfather of Soul: James Brown. His vocals recall an old soul sound akin to Brown and others like him, and he performs with the gusto of a younger man. His debut release My World, from Truth and Soul, brought together a raucous string section and melodic vocals.

Fields is a rare breed. NPRs music critic Oliver Wang said of Fields, “In a curious case of musical evolution, the older Fields becomes, the closer he gets to perfecting the sound of soul that he grew up with as a young man.”

Now in his 60s, Lee shows more vigor for music than most musicians his age and younger. He continues to tour and perform live, where he has been building a steady following since.

About the Author: Phin Upham is an investor at a family office/hedgefund, where he focuses on special situation illiquid investing. Before this position, Phin Upham was working at Morgan Stanley in the Media & Technology group. You may contact Phin on his Phin Upham website.