Miles Davis was born to a middle class family in Illinois. His father was a successful dentist and his mother was an accomplished music teacher. He was introduced to the trumpet and studied under Elwood Buchanan, who taught young Miles to play the instrument without vibrato. 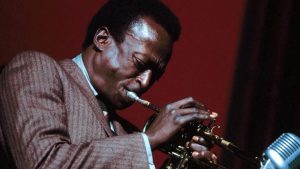 Davis’ first brush with fame came in high school. He’d already made something of a name for himself playing professionally, but the invitation from Dizzie Gillespie to join him and Charlie Parker on stage was his first taste of true glory. It was after that moment that Davis decided to leave Illinois to attend Julliard School of Music.

Davis sought out Charlie Parker during his time at Julliard, and the two of them began playing Harlem night clubs together shortly after that.

With his father’s blessing, Miles soon dropped out of Julliard to pursue music full time. He began as a member of Charlie Parker’s quintet, then appeared as the band leader for the Davis Sextet. Davis and Parker recorded frequently as Miles worked out the kinks of his new style for improvisational jazz, which would come to be known as “be-bop.”

The be-bop style led to Porgy and Bess and Kind of Blue, which were both critically acclaimed. Kind of Blue is commonly known as the best jazz album ever recorded.

Davis died in 1991 from complications resulting from pneumonia. He’d played at the Montreux Jazz Festival earlier that year with Quincy Jones, playing work that he had not played publicly for more than twenty years.