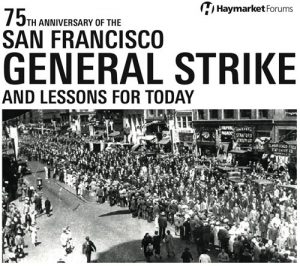 The Great Depression was a time where work was scarce, but working conditions were less than favorable. A far cry from the clean factory floors of today, the factories of Depression era manufacturing were filthy and dangerous. The San Francisco General Strike that took place in July of 1934 occurred for just four days, but the tensions that fueled that outburst were brewing for months.

A labor dispute with the dockworkers kicked the strike off. The dock workers demanded higher pay, more and better hours, and control over the hiring process. They set a deadline for their demands, and by May 10th were picketing the docks.

Protestors clashed with police on July 5th as the harbor opened its docks and began to unload ships with ringers. 1,000 armed cops showed up to the conflict, and photos from the day show heavy smoke from what appears to be either gunfire or tear gas. 64 people were injured, two were killed, and the event would come to be called “Bloody Thursday.”

It was a tragedy, and there was a massive public funeral for the two men who were killed. Massive support for the workers eventually grinded all operations to a halt for four days. In the end, the dock workers did get most of what they wanted, and the strike directly influenced the creation of the National Labor Relations Board that exists to protect the rights of workers. Some argue that unions aren’t what they used to be, and perhaps that’s true, but the General Strike showed what unions could do and that lent them credence that lasts into the modern era.

About the Author: Phin Upham is an investor at a family office/ hedgefund, where he focuses on special situation illiquid investing. Before this position, Phin Upham was working at Morgan Stanley in the Media & Technology group. You may contact Phin on his Phin Upham website or LinkedIn page.